Ubuntu is a (free) community-based Linux distribution. The desktop version feels rather similar to Mac with a “Finder”, icons to start apps, browsers and everything else users of commercial operating systems are accustomed to employing.

DO NOT USE OS X, WINDOWS OR ANYTHING EXCEPT UBUNTU 14.04 LTS!

If you go to the ROS installation page, it says there is an “experimental” version of ROS for OS X. It’s experimental for a reason – you’ll run into serious problems following this tutorial.

Did Linux and ROS Come Pre-Installed with TurtleBot?

If you purchased TurtleBot and it came pre-installed with Linux and ROS, you should check which versions shipped with your computer. You can find out which version of Linux you have by opening a terminal (ctrl + alt + t) and typing:

Results of “lsb_release -a” in Terminal

You can check which distribution of ROS you have by running: 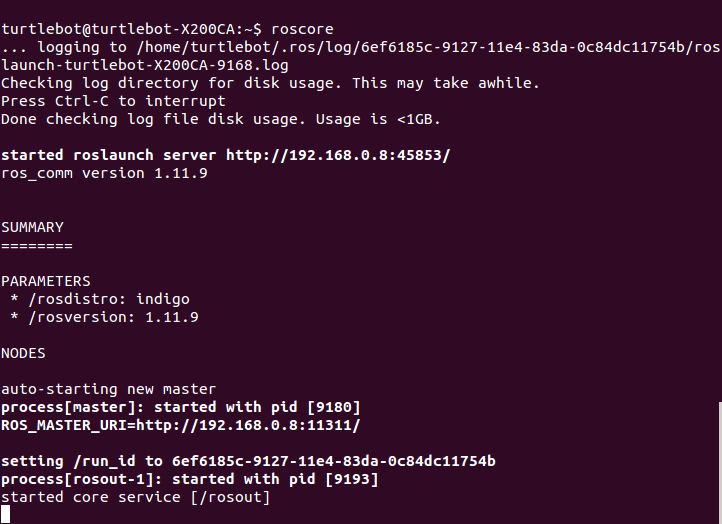 If you look below the PARAMETERS heading, you’ll see /rosdistro:.... Whatever is written next is the name of your ROS distribution. In our case it’s indigo, which is what we want.

When we purchased our TurtleBot 2 in September 2014 it shipped with Ubuntu 12 (12 being the version #) and ROS Hydro (Hydro being the distribution release’s name). The developers of ROS highly recommend using Ubuntu 14.04 LTS and ROS Indigo instead.

ROS Hydro and earlier distributions are not LTS.

TIP: The recently added “Jade” distribution is not LTS.

How to Install Linux

We started with two Windows computers and installed Linux instead. As we mentioned in a previous post, you have the TurtleBot netbook and a workstation. You’ll install Ubuntu Desktop 14.04 LTS on both of them using the same process.

First download Ubuntu Desktop 14.04 LTS on a Windows machine (virtually everyone will need the 64-bit version but if you are concerned here are instructions on how to check if you are 64-bit or 32-bit). Follow these instructions to create an Ubuntu-bootable USB drive.

TIP: Newer releases of Ubuntu Desktop (including 14.10) are not compatible with ROS.

After the USB drive is ready, connect it to the computer you want to install Linux on and reboot the machine.

You’ll need to get to the Boot Menu by pressing the appropriate function key during boot-up. Typically this is F12 or F8, but it could be any of them. You should then see an option to “Select a Boot First Drive”. Choose your USB drive (ours was called “USB-HDD”).

Another option if you are having trouble with the Boot Menu is to boot it into BIOS mode (another function key depending on your computer). Then go to “Advanced” and “Set First Boot Drive” to “USB-HDD”. Save and continue.

If you’ve set the correct Boot Drive you should see a few different options. The first one is “Try Ubuntu”; skip this as we are going to commit! Select “Install Ubuntu”. In the “Installation Type” settings we recommend “Erase”.

Warning
This will erase your current operating system and all data on it, but it will be the cleanest way to install the new OS.

From here things are pretty much the same as installing any other OS. Select a timezone, language, keyboard layout, etc. On the TurtleBot netbook it’s traditional to set the username and password to “turtlebot”. This isn’t mandatory but will help with following our tutorials.

Troubleshooting: You only see a black screen after you boot Ubuntu for the first time

We did have issues with one ASUS X200M netbook that after we installed Ubuntu it loaded with a black screen and Ubuntu never loaded.

This was because the intel graphics card wasn’t installed correctly by default.

To fix this, you have to boot Ubuntu in a “safe mode” to get past the graphics issues and load Ubuntu, then you can fix it.

TIP: we tried running the installer in the Ubuntu software center but this did not work. We needed “sudo”.

If you’re not familiar with opening and adding new terminal windows, we’ve prepared a short video tutorial to get you started:

If you’ve never used Linux before, take a moment to review tutorial one and tutorial two. Three and beyond are not required for the following tutorials.